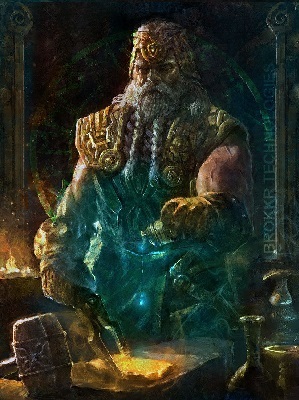 Pioneers of a brave new world, artificers are the mad brain-children of gnomish engineering and dwarven craftsmanship, refined by human ingenuity. The technology artificers use was hastened into creation by the onset of the Longest Year, as dwarves and gnomes combined forces to pursue solutions to the possibility of a world without magic. Though their machinations have manifested in many ways, artificers in particular have studied ways to weaponize this strange new science.

As it is yet a relatively fresh field of study, most of these inventions take the shape of augmentations; things which the artificers attach to their weapons and armor to provide dangerous effects, both to their enemies and themselves.

It is said by the common folk that these artificers are insane for fielding such experimental and dangerous contraptions, but they often see themselves as bold and selfless inventors willing to put themselves at risk for the betterment of Faerûn. Both beliefs, of course, are true to degrees that vary from one artificer to the next.

Artificers are seen as an exciting prospect.. from a distance. Their contraptions are known to shock, explode and set aflame those using them, to the point that some who survive such consistent trauma have developed a resistance to it.

Because it is such a new thing, artificers can currently only be found amongst the races that were at the forefront of their design. However, because dwarves and gnomes hold particular reverence for it, there are a few paladins of Moradin and Flandal Steelskin who have virtuously chosen to pilot the dangerous artificer technology as both sacrifice and service for their kin and their gods.

Artificers are usually more than simple engineers; beyond their love of their craft, they know how to fight and they use this little-known technology to great advantage, surprising their enemies with the mingled might of fire, electricity and steel.