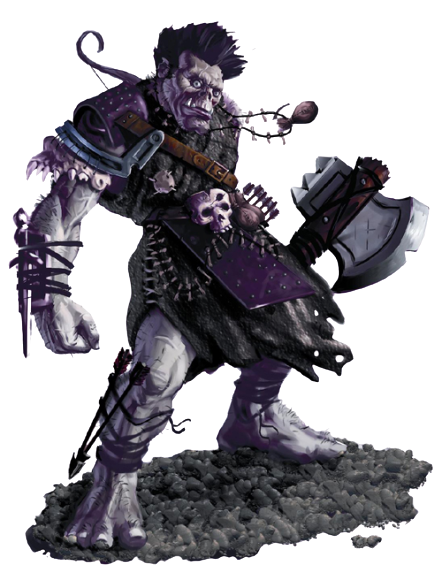 From the frozen wastes of the north and the hellish jungles of the south come brave, even reckless, warriors. Civilized people call them barbarians or berserkers and suspect them of mayhem, impiety, and atrocities. These "barbarians," however, have proven their mettle and their value to those who would be their allies. To enemies who underestimated them, they have proved their cunning, resourcefulness, persistence, and mercilessness.

Adventuring is the best chance barbarians have of finding a place in a civilized society. They're not well suited to the monotony of guard duty or other mundane tasks. Barbarians also have no trouble with the dangers, the uncertainties, and the wandering that adventuring involves. They may adventure to defeat hated enemies. They often have a noted distaste for that which they consider unnatural, including undead, demons, and devils.

The barbarian is an excellent warrior. Where the fighter's skill in combat comes from training and discipline, however, the barbarian has a powerful rage. While in this berserk fury, they become stronger and tougher, better able to defeat their foes and withstand their attacks. These rages leave them winded, and they have the energy for only a few such spectacular displays per day, but those few rages are usually sufficient. They are at home in the wilds, and they run at great speed well suited to the great outdoors.

Barbarians are never lawful. They may be honorable, but at heart they are wild. This wildness is their strength, and it could not live in a lawful soul. At best, barbarians of chaotic alignment are free and expressive. At worst, they are thoughtlessly destructive.

Some barbarians distrust established religions and prefer an intuitive, natural relationship to the cosmos over formal worship. Others devote themselves to powerful deities - a barbarian is capable of as fierce devotion to their god as any.

Barbarians most often come from uncivilized lands or from barbaric tribes on the outskirts of civilization. A barbarian adventurer may have been lured to the settled lands by the promise of riches, may have escaped after being captured in his homeland and sold into "civilized" slavery, may have been recruited as a soldier, or may have been driven out of his homeland by invaders. Barbarians share no bond with each other unless they come from the same tribe or land. In fact, they think of themselves not as barbarians but as warriors.

Human barbarians come from the distant wild lands on the edge of civilization. Most half-orc barbarians lived among orcs before abandoning them for human lands. Dwarf barbarians are rare, usually hailing from dwarven kingdoms that have fallen into barbarism as a result of recurrent war with goblinoids, orcs, and giants. Barbarians of other races are very rare.

Among the brutal humanoids, barbarians are more common than fighters. Orcs and ogres are especially likely to be barbarians.

As people of the wild, barbarians are most comfortable in the company of rangers, druids, and clerics of nature deities. Many barbarians admire the talents and spontaneity of bards, and some are enthusiastic lovers of music. Barbarians don't trust that which they don't understand, and that includes wizardry - even less so in the wake of The Longest Year. They find sorcerers more understandable than wizards, but maybe that's just because sorcerers tend to be more charismatic. Monks, with their studied, practiced, deliberate approach to combat, sometimes have a hard time seeing eye to eye with barbarians, but members of these classes aren't necessarily hostile to each other. Barbarians have no special attitudes toward fighters, paladins, clerics, or rogues.

A barbarian's typical primary role in a group of adventurers is as a front-line combat specialist. No other character can match their sheer toughness. They can also serve as a good scout, thanks to their speed, skill selection, and trap sense.