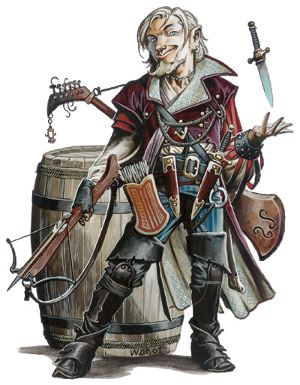 It is said that music has a special magic, and the bard proves that saying true. Wandering across the land, gathering lore, telling stories, working magic with his music, and living on the gratitude of his audience - such is the life of a bard. When chance or opportunity draws them into a conflict, bards serve as diplomats, negotiators, messengers, scouts, and spies.

A bard's magic, entirely Arcane, comes from the Weave, but specifically manifests through an instrument, be it their voice or a physical object. Some, however, believe that their magic comes from their heart. If their heart is good, a bard brings hope and courage to the downtrodden and uses their tricks, music, and magic to thwart the schemes of evildoers. If the nobles of the land are corrupt, the good bard is an enemy of the state, cunningly evading capture and raising the spirits of the oppressed. But they say music can spring from an evil heart as well. Evil bards forego blatant violence in favour of manipulation, holding sway over the hearts and minds of others and taking what enraptured audiences "willingly" give.

Bards see adventures as opportunities to learn. They practice their many skills and abilities, and they especially relish the opportunity to enter a long-forgotten tomb, to discover ancient works of magic, to decipher old tomes, to travel to strange places, to encounter exotic creatures, and to learn new songs and stories. Bards love to accompany heroes (and villains), joining their entourage to witness their deeds firsthand - a bard who can tell a marvelous story from personal experience earns renown among their fellows. Indeed, after telling so many stories about heroes doing mighty deeds, many bards take these themes to heart and assume heroic roles themselves.

A bard brings forth magic from sheer willpower, not from a book. They can cast only a small number of spells, but they can do so without selecting or preparing them in advance. Their magic emphasizes charms and illusions over the more dramatic evocation spells that wizards and sorcerers often use.

In addition to spells, a bard works magic with his music and poetry. They can encourage allies, hold their audiences rapt, and counter magical effects that rely on speech or sound.

Bards have some of the skills that rogues have, although bards are not as focused on skill mastery as rogues are. A bard listens to stories as well as telling them, of course, so they have a vast knowledge of local events and noteworthy items.

Bards are wanderers, guided by whim and intuition rather than by tradition or law. The spontaneous talent, magic, and lifestyle of the bard are incompatible with a lawful alignment.

Bards revere many gods, but most often ones with the Travel portfolio. They sometimes camp near wayside shrines, hoping to earn some coin from the travelers who stop to leave offerings for the gods. Bards tend to spend so much time on the road that, while they may be devoted to a deity, they are rarely devoted to any particular temple.

An apprentice bard learns their skills from a single experienced bard, whom they follow and serves until they are ready to strike out on their own. Many bards were once young runaways or orphans, befriended by wandering bards who became their mentors. Since bards occasionally congregate in both formal and informal "colleges," the apprentice bard may meet many of the more prominent bards in the area. Still, the bard has no strong allegiance to bards as a whole. In fact, some bards are highly competitive with other bards, jealous of their reputations and defensive.

Bards are commonly human, gnome, elf, or half-elf. Humans take well to the wandering life and adapt easily to new lands and customs. Gnomes have a sense of humor and trickery that lends itself to a bardic career. Elves are talented in music and magic, so the career of the bard comes naturally to them. A bard's wandering ways suit many half-elves, who often feel like strangers even when at home.

Half-orcs, even those raised among humans, find themselves ill suited to the demands of a bard's career. There are no bardic traditions among dwarves, or halflings, though occasional individuals of these races find teachers to train them in the ways of the bard. Bards are exceedingly rare among the savage humanoids, except among centaurs. Centaur bards sometimes train the children of humans or other humanoids.

A bard works well with companions of other classes. They often serve as the spokesman of the party, using their social skills for the party's benefit. In a party without a wizard or sorcerer, the bard contributes their magic. In a party without a rogue, they use their skills. A bard is curious about the ways of more focused or dedicated adventurers, so they often try to pick up pointers from fighters, sorcerers, and rogues.

The bard is perhaps the ultimate generalist. In most adventuring groups, they work best in a supporting role. They can't usually match the stealth of the ranger or the rogue, the spellcasting power of the cleric or the wizard, or the combat prowess of the barbarian or the fighter. However, they make all the other characters better at what they do, and they can often fill in for another character when needed. For a typical group of four characters, the bard is perhaps the most useful fifth character to consider adding, and they can make a great team leader.

Spellcasting: Arcane (spell failure from armor is a factor), charisma-based (a base charisma score of 10 + the spell's level is required to cast a spell, bonus spells are based on modified charisma, and the charisma modifier affects spell DCs), and spontaneous cast (no spell preparation required).