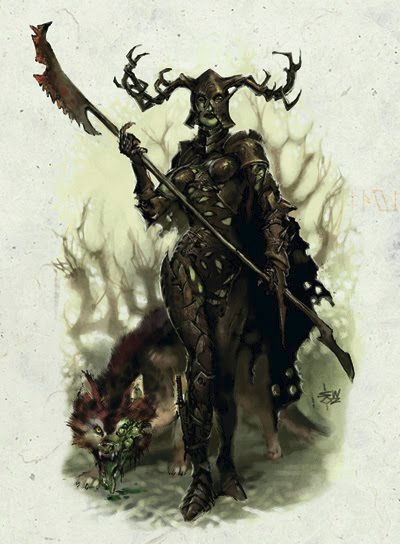 When a druid turns away from the land, the land turns away from them. Some ex-druids make peace with this change; others seek to restore the bond. A few, however, actually embrace their disconnection from nature and become forces of destruction. These few, called blighters, bring desolation wherever they tread. The devoted servants of nature corrupted, ruined, and destroyed, Blighters are the caretakers of lands ravaged by natural disaster - in their eyes, at the very least. While some are devoted to reforming and reclaiming lands despoiled by the ravages of civilization, others seek out the more rapacious violence inherent in nature and feed the creeping rot and decay that brings an end to all things.

Only human ex-druids seem attracted in any considerable number to the blighter’s path. Legends say that a few elven druids have also turned to destruction over the millennia—a terrifying prospect given how much land they could destroy in their long lifetimes.

NOTE: This class is universally treated as an undesirable and generally is likely to struggle within the setting of TDN. What this inherently entails is guaranteed permanent death through our death system. As such Blighter isn't recommended for new players or those that shy from hardship, confrontation, and conflict in storytelling.

Spellcasting: Divine (Spell Failure from armor is ignored), Wisdom-based (a base wisdom score of 10 + the spell's level is required to cast a spell, bonus spells are based on modified Wisdom, and the Wisdom modifier affects spell DCs).
NOTE: Elves cannot become Blighters due to racial alignment and cultural differences inherently making such a concept extremely unlikely.