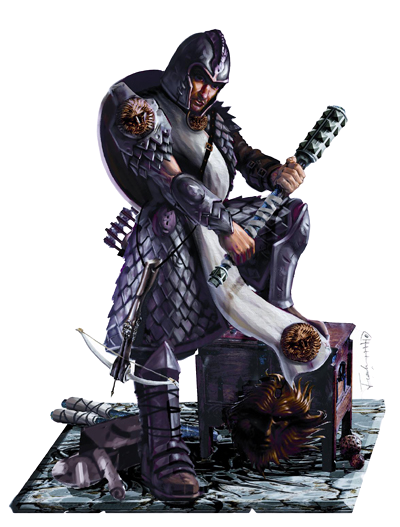 The handiwork of the gods is everywhere - in places of natural beauty, in mighty crusades, in soaring temples, and in the hearts of worshipers. Like people, gods run the gamut from benevolent to malicious, reserved to intrusive, simple to inscrutable. The gods, however, work mostly through intermediaries - their clerics. Good clerics heal, protect, and avenge. Evil clerics pillage, destroy, and sabotage. A cleric uses the power of their god to make their god's will manifest. And if a cleric uses their god's power to improve their own lot, that's to be expected, too.

Ideally, a cleric's adventures support their god's causes, at least in a general way. A good cleric, for example, helps those in need. If, through noble acts, they can improve the reputation to their god or temple, that's even better. An evil cleric seeks to increase their own power and that of their deity, often through fear.

Clerics sometimes receive orders, or at least suggestions, from their ecclesiastical superiors, directing them to undertake missions for the church. The clerics and their companions are compensated fairly for these missions, and the church may be especially generous with the casting of needed spells as payment. Of course, clerics are people, too, and they may have any or all the more common motivations for adventuring - even if some will not readily admit as much.

Clerics are masters of divine magic, which is especially good at healing. Even an inexperienced cleric can bring people back from the brink of death through mending a severe wound, and an experienced cleric can bring back people who have crossed over that brink. As channelers of divine energy, clerics can affect undead creatures. A good cleric can turn away or even destroy undead; an evil cleric can bring undead under their control. Clerics have some combat training. They can use simple weapons, and they are trained in the use of armour (Heavy Armor is not granted for free), since armour does not interfere with divine spells the way it does with Arcane spells.

Like the gods they serve, clerics can be of any alignment. Because people more readily worship good deities than neutral or evil ones, there are more good than evil clerics. Clerics also tend toward law instead of chaos, since lawful religions tend to be more structured and better able to recruit and train clerics than chaotic ones.

Typically, a cleric is the same alignment as their deity, though some clerics are one step away from their respective deities in alignment.

Every reasonably well-known deity has clerics devoted to him or her, so clerics can be of any religion. The majority of non-human clerics are devoted to the chief god of the appropriate racial pantheon. Most clerics are officially ordained members of religious organizations, commonly called churches. Each has sworn to uphold the ideals of their church.

Most clerics join their churches as young adults, though some are devoted to a god's service from a young age, and a few feel the call later in life. While some clerics are tightly bound to their churches' activities on a daily basis, others have more freedom to conduct their lives as they please, as long as they do so in accordance with their gods' wishes.

Clerics of a given religion are all supposed to get along, though schisms within a church are often more bitter than conflicts between religions. Clerics who share some basic ideals, such as goodness or lawfulness, may find common cause with each other and see themselves as part of an order or body that supersedes any given religion. Clerics of opposed goals, however, are sworn enemies. In civilized lands, open warfare between religions occurs only during civil wars and similar social upheavals, but vicious politicking and tension between opposed churches is the common norm.

All the common races are represented in this class, since the need for religion and divine magic is universal. The clerics of most races, however, are too focused on their religious duties to undertake an adventurer's life. Crusading, adventuring clerics most often come from the human and dwarf races. Among the savage humanoids, clerics are less common. The exception is troglodytes, who take well to divine magic and are often led by priests, who make a practice of sacrificing and devouring captives.

In an adventuring party, the cleric is everybody's friend and often the glue that holds the party together. As the one who can channel divine energy, a cleric is a capable healer, and adventurers of every class appreciate being put back together after they've taken some hard knocks. Clerics sometimes clash with druids, since druids represent an older, more primal relationship between the mortal and the divine. Mostly, though, the religion of a cleric determines how they get along with others. A cleric of Mask, for one, gets along fine with rogues and ne'er-do-wells, for example, while a cleric of the Triad rankles at such company.

The cleric serves as a typical group's primary healer, diviner, and defensive specialist. He can hold his own in a fight but is just as capable of strenghtening and protecting others through magic. The cleric's domains and spell selection can greatly affect their role as well.

Alignment Restriction: None*
*Clerics must select an Alignment within one-step of their deity's alignment. Additionally, Clerics will need to follow their deity's dogma.

Proficiencies: Armor (light & medium), Shields (small & large), Weapons (simple)
- Heavy Armor was removed as a standard proficiency. It is still selectable as a feat during Character Creation or On Level Up.
- Your Cleric will receive the proficiency category feat that covers their deity's favored weapon.

Spellcasting: Divine (Spell Failure from armor is ignored), Wisdom-based (a base Wisdom score of 10 + the spell's level is required to cast a spell, bonus spells are based on modified Wisdom, and the Wisdom modifier affects spell DCs), and requires preparation (except for "Cure" and "Inflict" spells, which can be spontaneous cast).

Level Progression / Spells per Day Cleric Domains:A cleric must choose domains that match their deity.
Nearly all Cleric Domains have been modified.

Modified and New Domain Abilities:
All domain abilities are useable once per day, the DC of any domain ability is 10 + 1/2 cleric level + the cleric's wisdom modifier.
Spells:
Top Bottom