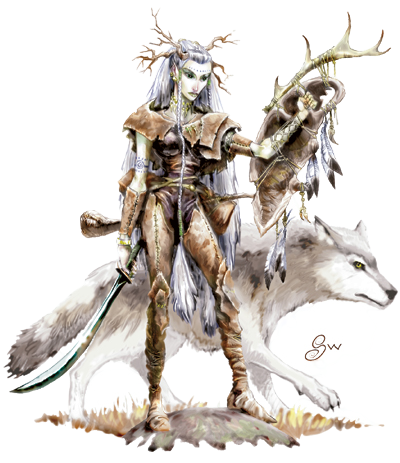 The fury of a storm, the gentle strength of the morning sun, the cunning of the fox, the power of the bear - all these and more are at the druid's command. The druid however, claims no mastery over nature. That claim, they say, is the empty boast of a city dweller. The druid gains their power not by ruling nature but by being at one with it. To trespassers in a druid's sacred grove, and to those who feel their wrath, the distinction is overly fine.

Druids adventure to gain knowledge (especially about animals and plants unfamiliar to them) and power. Sometimes, their superiors call on their services. Druids may also bring their power to bear against those who threaten what they love, which more often includes ancient stands of trees or trackless mountains than people. While druids accept that which is horrific or cruel in nature, they hate that which is unnatural, including aberrations (such as ettercaps and carrion crawlers) and undead (such as zombies and vampires). Druids sometimes lead raids against such creatures, especially when they encroach on the druids' territory.

Druids cast divine spells much the same way clerics do, through the acceptance of a nature deity. The worship of an appropriate deity is required and they're expected to follow a deity's alignment restrictions. Their spells are oriented toward nature and animals. In addition to spells, druids gain an increasing array of magical powers, including the ability to take the shapes of animals, both mundane and special, as they advance in level.

The armour of a druid is restricted by traditional oaths to the items noted in Weapon and Armor proficiency(below), All other armor is prohibited. Though a druid could learn to wear full plate, putting it on would violate their oath and suppress their druidic powers. Druids avoid carrying much worked-metal with them because it interferes with the pure and primal nature that they attempt to embody.

Druids, in keeping with nature's ultimate indifference, must maintain at least some measure of dispassion. As such, they must be neutral on at least one alignment axis (chaotic-lawful or good-evil), if not both. Just as nature encompasses such dichotomies as life and death, beauty and horror, and peace and violence, so two druids can manifest different or even opposite alignments (neutral good and neutral evil, for instance) and still be part of the druidic tradition.

Though their organization is invisible to most outsiders, who consider druids to be loners, many druids are actually part of a society that spans the land, ignoring political borders. A prospective druid is inducted into this society through secret rituals, including tests that not all survive. Only after achieving some level of competence is the druid allowed to strike out on their own.

Most druids are nominally members of this druidic society, though some individuals are so isolated that they have never seen any high ranking members of the society or participated in druidic gatherings. Many druids recognize each other as brothers and sisters. Like true creatures of the wilderness, however, druids sometimes compete with or even prey on each other.

Druids may live in small towns, but they always spend a good portion of their time in wild areas. Even large cities surrounded by cultivated land as far as the eye can see often have druid groves nearby - small, wild refuges where druids live and which they protect fiercely. Near coastal cities, such refuges may be nearby islands, where the druids can find the isolation they need.

Elves and gnomes have an affinity for natural lands and often become druids. Humans and half-elves also frequently adopt this path, and druids are particularly common among savage humans. Dwarves, halflings, and half-orcs are rarely druids.

Few from among the brutal humanoids are inducted into druidic society, though gnolls have a fair contingent of evil druids among them. Gnoll druids are accepted, though perhaps not welcomed, by druids of other races.

The druid shares with rangers and many barbarians a reverence for nature and a familiarity with natural lands. They often don't much understand the urban mannerism typical of a rogue, and they may find arcane magic disruptive and slightly distasteful. The typical druid also dislikes the paladin's devotion to abstract ideals instead of "the real world." Druids, however, are nothing if not accepting of diversity, and they take little offense at other characters, even those very different from them.

The druid enjoys extraordinary versatility. Though they lack the sheer healing power of the cleric, they make up for it with additional offensive power, thanks to their spell selection and wild shape ability. A druid back up by another secondary healer (such as a paladin) can prove extremely valuable to a group of adventurers. Their animal companion also provides valuable melee combat support.

Druidic OathDruidic spiritual oaths prohibit them from using weapons other than the following: club, dagger, dart, spear, quarterstaff, scimitar, sickle, shortspear, shortbow & longbow. They are proficient with light and medium armors but are prohibited from wearing metal/heavy armors (thus, they may only wear padded, leather, or hide armor). They may only use wooden shields.

Violation of the Druidic Oaths results in 4 RL Hours of lost Spellcasting. Repeated offenses may result in falling altogether at the discretion of the DM team.

Note on Mielikki Exception: Mielikki Druids receive no exception for Druidic oath violations on TDN. In narrative, the exception existed up until The Longest Year, at the conclusion of that year, the oaths were universal across all Druids.
*Denotes modification from vanilla NWN.

Spellcasting: Divine (spell failure from armor is ignored), wisdom-based (a base wisdom score of 10 + the spell's level is required to cast a spell, bonus spells are based on modified wisdom, and the wisdom modifier affects spell DCs).