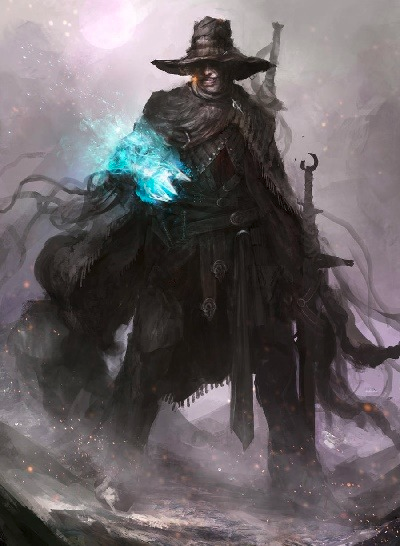 Hexblades are innate arcanists that, through some inner calling or by some form of mentorship, have mingled their spellcasting prowess with martial might. Owing no allegiance to any particular god or patron, they often find themselves following their own path. In the wake of The Longest Year and by merit of their application of the Art, most fear and distrust them even more than the average spellcaster. Hexblades tend to focus on personal gain, whether that gain is power, prestige, wealth, or all the above. At lower levels, the hexblade relies on melee ability augmented by his special power to curse his enemies. As he gains experience, he becomes capable of enhancing his blade with various hex enchantments, while his curse ability becomes more potent and he gains the ability to warp the normal laws of probability.

Alignment Restriction: Any non-good. A Hexblade who becomes good-aligned loses the ability to use all Hexblade class abilities. He may not progress any farther in levels as a Hexblade. He retains all the other benefits of the class (weapon and armor proficiencies and bonus feats).

Proficiencies: Hexblades are proficient with all simple and martial weapons, light and medium armor, and with shields (except tower shields). A Hexblade does not incur any spell failure for the use of any of his abilities.

Note: All Hexblade abilities are considered arcane in nature, and thus makes them ineligible for multiclassing with classes like Artificer and Palestone Knight.

Hex Strikes:
Can only be taken after level 10: