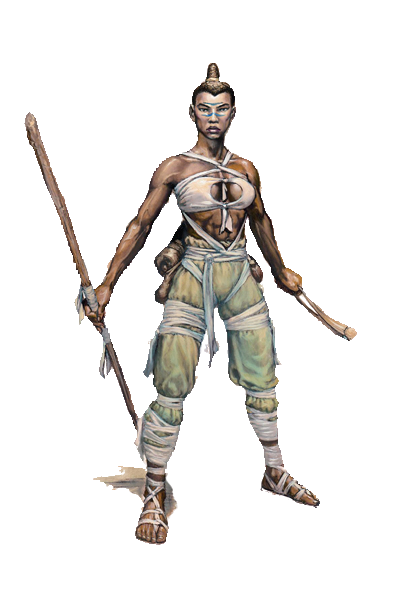 Dotted across the landscape are monasteries - small, walled cloisters inhabited by monks who pursue personal perfection through action as well as contemplation. They train themselves to be versatile warriors skilled at fighting without weapons or armour. The inhabitants of monasteries headed by good masters serve as protectors of the people in more ways than one. Ready for battle even when barefoot and dressed in peasant clothes, monks can travel unnoticed among the populace, catching bandits, warlords, and corrupt nobles unawares. In contrast, the residents of monasteries headed by evil masters rule the surrounding lands through fear, as an evil warlord and his entourage might. Evil monks make ideal spies, infiltrators, and assassins.

A monk approaches an adventure as if it were a personal test. While not prone to showing off, monks are willing to try their skills against whatever obstacles confront them. They are not greedy for material wealth, but they eagerly seek that which can help them perfect their art. Many monks care primarily for the perfection of their art and, thereby, their personal perfection. Their goal is to achieve a state that is beyond the mortal realm. Equally many are the opposite, championing the causes of their monastery and order.

The key feature of the monk is their ability to fight unarmed and unarmored. Thanks to their rigorous training, they can strike as hard as if they were armed and strike faster than a warrior with a sword.

Though a monk casts no spells, they have a magic of her own. They channel a subtle energy, called ki, which allows them to perform amazing feats. The monk's best-known feat is their ability to stun an opponent with an unarmed blow. A monk also has a preternatural awareness that allows them to dodge an attack even if they are not consciously aware of it.

As the monk gains experience and power, their mundane and ki oriented abilities grow, giving them more and more power over themself and, sometimes, over others.

A monk's training requires strict discipline. Only those who are lawful at heart are capable of undertaking it.

A monk's training is their spiritual path. They are inner directed and capable of a private, mystic connection to the spiritual world, so they need neither clerics nor gods, though the nature of the Realms instills worship in the vast majority nonetheless.

A monk typically trains in a monastery or at least some sort of formal setting perceived as one. Most monks were children when they joined the monastery, sent to live there when their parents died, when there wasn't enough food to support them, or in return for some kindness that the monastery had performed for the family. Life in the monastery is so focused that by the time a monk sets off on their own, they tend to feel little connection to their former family or village.

In larger cities, master monks have set up monk schools to teach their arts to those who are interested and worthy. The monks who study at these academies often see their rural cousins from the monasteries as backward.

A monk may feel a deep connection to their monastery or school, to the monk who taught them, to the lineage into which they were trained, or to all of these. Some monks, however, have no sense of connection other than to their own path of personal development. Monks recognize each other as a select group set apart from the rest of the populace. They may feel kinship, but they also love to compete with each other to see whose ki is strongest.

Monasteries are found primarily among humans, who have incorporated them into their ever-evolving culture. Thus, many monks are humans, and many are half-orcs and half-elves who live among humans. The monk tradition is alien to elf, dwarf and gnome culture, and halflings typically have too mobile a lifestyle to commit themselves to a monastery, so dwarves, gnomes, and halflings very rarely become monks.

The savage humanoids do not have the stable social structure that allows monk training, but the occasional orphaned or abandoned child from some humanoid tribe winds up in a civilized monastery or is adopted by a wandering master, even if they often don't live long enough to fulfill their monastic path. The evil subterranean elves known as the drow have a small but successful monk tradition.

Monks sometimes seem distant because they often have neither motivation nor skills in common with members of other classes. Monks do, however, work well with the support of others, and they usually prove themselves reliable companions. The monk functions best as an opportunistic combatant, using their speed to get into and out of combat quickly rather than engaging in prolonged melees. They also make an excellent scout, particularly if they focuses their skill selection on stealth.

Level Progression
Monk Bonus Feats:
(May only be taken once)