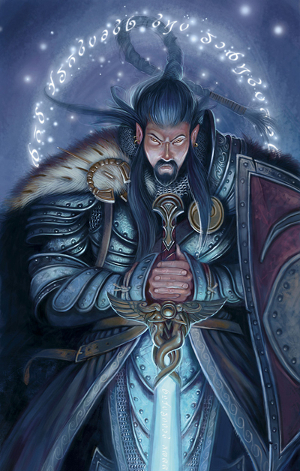 The compassion to pursue good, the will to uphold law, and the power to defeat evil - these are the three weapons of the paladin. Few have the purity and devotion that it takes to walk the paladin's path, but those few are rewarded with the power to protect, to heal, and to smite. In a land of scheming nobles and bloodthirsty monsters, the paladin is the final hope that cannot be extinguished.

Paladins take their adventures seriously and have a penchant for referring to them as quests. Even a mundane mission is, in the heart of the paladin, a personal test - an opportunity to demonstrate bravery, to develop martial skills, to learn tactics, and to find ways to do good. Still, the paladin really comes into her own when leading a mighty campaign against evil, not when merely looting ruins.

Divine power protects the paladin and gives them their special powers. It wards off harm, protects them from disease, lets them heal themself, and guards their heart against fear. The paladin can also direct this power to help others, healing their wounds or curing diseases. Finally, the paladin can use this power to destroy evil. More experienced paladins can smite evil foes and turn away undead.

Paladins must be lawful good, and they lose their divine powers if they deviate from that alignment. Additionally, paladins swear to follow a code of conduct that is in line with lawfulness and goodness.

No one ever chooses to be a paladin. Becoming a paladin is answering a call, accepting one's destiny. No one, no matter how diligent, can become a paladin through practice. The nature is either within one or not, and it is not possible to gain the paladin's nature by any act of will. It is possible, however, to fail to recognize one's own potential, or to deny one's destiny. Occasionally, one who is called to be a paladin denies that call and pursues some other life instead.

Most paladins answer the call and begin training as adolescents. Typically, they become squires or assistants to experienced paladins, train for years, and finally set off on their own to further the causes of good and law. Other paladins, however, find their calling only later in life, after having pursued some other career. Some paladins, regardless of background, recognize in each other an eternal bond that transcends culture, race, and even religion. Any two such paladins, even from opposite sides of the world, may consider themselves comrades.

Humans, with their ambitious souls, make great paladins. Half-elves, who often have human ambition, may also find themselves called into service as paladins. Dwarves are sometimes paladins, but becoming a paladin may be hard on a dwarf because it means putting the duties of the paladin's life before duties to family, clan, and king. Members of the other common races rarely hear the call to become paladins, but it is not unheard of. Among the savage humanoids and elves alike, paladins are all but unheard of.

Even though paladins are in some ways set apart from others, they eagerly team up with those whose skills and capabilities complement their own. They work well with good and lawful clerics, and they appreciate working with those who are brave, honest, and committed to good. While they cannot abide evil acts by their companions, they are otherwise willing to work with a variety of people quite different from themselves. Charismatic, trustworthy, and well respected, the paladin makes a fine leader for a team.

The paladin's chief role in most groups is as a melee combatant, but they contribute other useful support as well. They make a good secondary healer in emergencies, and their high Charisma opens up fine leadership opportunities.

Paladin Orders (every paladin must choose one - click on the link to review your options!)

Spellcasting: Divine (spell failure from armor is ignored), wisdom-based (a base wisdom score of 10 + the spell's level is required to cast a spell, bonus spells are based on modified wisdom, and the wisdom modifier affects spell DCs), and requires preparation.