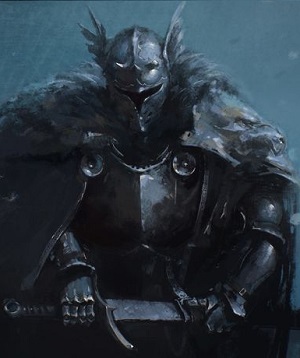 Emerging out of the chaos of the Longest Year, the palestone knights lead a crusade against magic. With bizarre powers of utterly alien origin, these stern inquisitors have formed a vanguard of their own devising, spearheading an assault on spellcasters across the Realms. Many of these knights band together into orders with a particular philosophy and set of principles, though these ideologies are often so extreme that they clash and spark violence even amongst each other. Other knights seek to war against the Weave entirely alone, even when such a path is fraught with innumerable dangers.

Some of these knights reject the idea of bringing magic into the world personally while accepting the moderate use of arcane or divine aid from others as long as it isn’t misused, while others consider any use of magic to be punishable by death.
All of these grim warriors, though, share one singular desire; to eventually see the complete and utter eradication of the Weave. To this end, they all take an oath upon becoming a sworn knight - a knighthood which no local authority recognizes, but by which they symbolise a strange sort of noble purpose to themselves.

Because of their mercurial ideologies, none can truly know what to expect from a palestone knight. Without knowing their personal principles, they are - in the minds of others - just as likely to stab an innocent civilian for accepting divine healing as they are to hunt down a dangerous cabal of necromancers to bring them to justice.

This has led to them having a mixed reception from the world at large, however as their numbers grow and their orders become more prominent and recognizable, more and more authorities are learning which of these knights to welcome and which to chase away. In Amn, the order known as the Pale Judicators is rumoured to have established a base of operations, which Murann has tentatively allowed without resistance.

*Note: As this is an entirely custom class with lore specific to The Dragon’s Neck, a roleplay guide has been provided with some background and details to help any interested players:

Class Restrictions: Unable to multiclass with arcane or divine classes

Proficiencies: All simple and martial weapons, light and medium armor and shields (including tower shields)