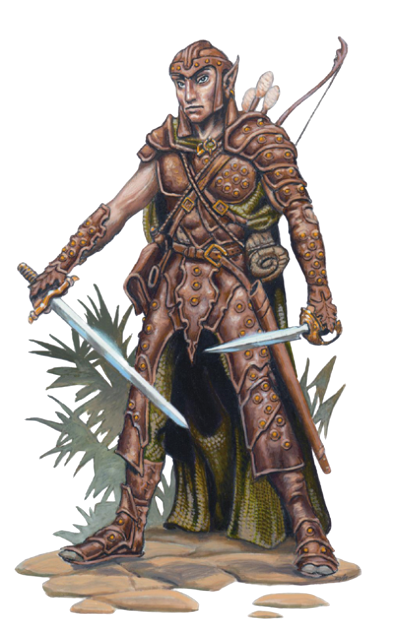 The forests are home to fierce and cunning creatures, such as bloodthirsty owlbears and malicious worgs. But more cunning and powerful than these monsters is the ranger, a skilled hunter and stalker. They know the woods as if they were their home (as indeed they are), and they know their prey in deadly detail.

A ranger often accepts the role of protector, aiding those who live in or travel through the woods. In addition, a ranger tends to carry grudges against certain types of creatures and looks for opportunities to find and destroy them. They may adventure for all the reasons that a fighter does.

A ranger can use a variety of weapons and is quite capable in combat. Their skills allow them to survive in the wilderness, to find their prey, and to avoid detection. They also have special knowledge about certain types of creatures, which makes it easier for them to find and defeat such foes. Finally, an experienced ranger has such a tie to nature that they can actually draw upon natural power to cast divine spells, much as a druid does. The worship of an appropriate deity is required for these spells to manifest and, as rangers are a divine casting class, they're expected to follow a deity's alignment restrictions.

Rangers can be of any alignment. Most are good, and such rangers usually function as protectors of the wild areas. In this role, a ranger seeks out and destroys or drives off evil creatures that threaten the wilderness and/or civilization. Good rangers also protect those who travel through the wilderness, serving sometimes as guides and sometimes as unseen guardians. Most rangers are also chaotic, preferring to follow the ebb and flow of nature or of their own hearts instead of rigid rules. Evil rangers, though rarer, are much to be feared. They revel in nature's thoughtless cruelty and seek to emulate her most fearsome predators. They gain divine spells just as good rangers do.

Some rangers gained their training as part of special military teams, such as the Needles of Mielikki, but others learned their skills from solitary masters who accepted them as students and assistants. Some even learn the path of the ranger through necessity; through the need to survive, all on their lonesome. The rangers of a particular master may count themselves as cohorts, or they may be rivals for the status of best student and thus the rightful heir to their master's fame.

Elves often choose the ranger's path. They are at home in the woods, and they have the grace to move stealthily. Half-elves who feel their elf parents' connection to the woods are also likely to adopt this class. Humans are often rangers as well, being adaptable enough to learn their way around the woods even if it doesn't come naturally to them. Half-orcs may find the life of a ranger more comfortable than life among cruel and taunting humans (or orcs). Gnome rangers are more common than gnome fighters, but still they tend to remain in their own lands rather than adventure among "the big people." Dwarf rangers are rare, but they can be quite effective. Instead of living in the surface wilderness, they are at home in the endless caverns beneath the earth. Here they hunt down and destroy the enemies of dwarvenkind with the relentless precision for which dwarves are known. Dwarf rangers are often known as cavers. Halfling rangers are highly respected for their ability to help communities of halflings prosper as they pursue their nomadic lifestyle. Among the savage humanoids, only gnolls are commonly rangers, using their skills to slyly stalk their prey.

Rangers get along well with druids and to some extent with barbarians. They are known to bicker with paladins, mostly because they often share goals but differ in style, tactics, approach, philosophy, and esthetics. Since rangers don't often look to other people for support or friendship, they find it easy to tolerate people who are quite different from themselves, such as bookish wizards and preachy clerics. They often just don't care enough to get upset about others' differences.

The ranger's best role is that of a scout and secondary combatant. Without the heavy armour of the fighter or the staying power of the barbarian, the ranger often focuses on opportunistic and ranged attacks. Most rangers user their animal companions as sentries, scouts, or to assist them in melee combat.

Spellcasting: Divine (spell failure from armor is ignored), wisdom-based (a base wisdom score of 10 + the spell's level is required to cast a spell, bonus spells are based on modified wisdom, and the wisdom modifier affects spell DCs), and requires preparation.

Note: Rangers must select a deity from the ranger patron list. Additionally, failure to abide by the dogma of said deity may result in limitations of spell-casting and other deity-granted abilities.

Ranger Path:
Ranger paths are chosen after character creation, in the NUI windows every player is subjected to.