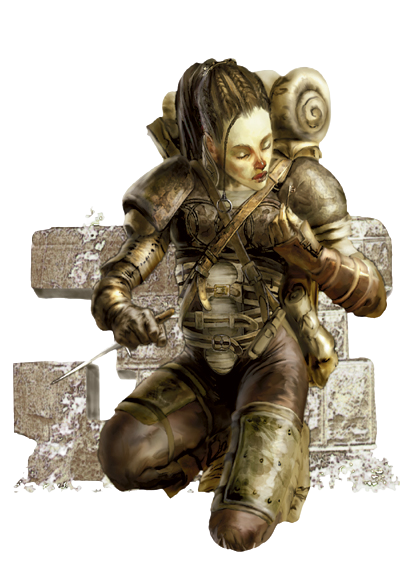 Rogues share little in common with each other. Some are stealthy thieves. Others are silver-tongued tricksters. Still others are scouts, infiltrators, spies, diplomats, or thugs. What they share is versatility, adaptability, and resourcefulness. In general, rogues are skilled at getting what others don't want them to get: entrance into a locked treasure vault, safe passage past a deadly trap, secret battle plans, a guard's trust, or some random person's pocket money.

Rogues adventure for the same reason they do most things: to get what they can get. Some are after loot; others want experience. Some crave fame; others seek infamy. Quite a few also enjoy a challenge. Figuring out how to thwart a trap or avoid an alarm is great fun for many rogues.

Rogues are highly skilled, and they can concentrate on developing any of several categories of skills. While not equal to members of many other classes in combat, a rogue knows how to hit where it hurts, and they can dish out a lot of damage with a sneak attack. They have a sixth sense when it comes to avoiding danger. Experienced rogues develop mystical powers and skills as they master the arts of stealth, evasion, and sneak attacks. In addition, while not capable of casting spells on their own, rogues can "fake it" well enough to cast spells from scrolls, activate wands, and use just about any other magic item.

Rogues follow opportunity, not ideals. They are more likely to be chaotic than lawful, they are a diverse bunch, so they may be of any alignment.

Some rogues are officially inducted into an organized fellowship of rogues or "guild of thieves." Some are self taught; others learned their skills from independent mentors. Often, an experienced rogue needs an assistant for scams, second-story jobs, or just for watching her back. They recruit a likely youngster, who then learns the skills of the trade on the job. Eventually, the trainee is ready to move on, perhaps because the mentor has run afoul of the law, or perhaps because the trainee has double-crossed their mentor and needs some "space." Rogues do not see each other as fellows unless they happen to be members of the same guild or students of the same mentor. In fact, rogues trust other rogues less than they trust anyone else. They're no fools.

Adaptable and often unprincipled, humans take to the rogue's life with ease. Halflings, elves, and half-elves also find themselves well suited to the demands of the career. Dwarf and gnome rogues, while less common, are renowned as experts with locks and traps. Half-orc rogues tend toward thuggery. Rogues are common among brutal humanoids, especially goblins and bugbears. Rogues who learn their arts in savage lands, however, generally don't have much experience with complex mechanisms such as traps and locks.

Rogues love and hate working with members of other classes. They excel when protected by warriors and supported by spellcasters. There are plenty of times, however, that they wish everyone else was as quiet, guileful, and patient as they. Rogues are particularly wary of paladins, so they endeavour to prove themselves useful when contact with paladins is unavoidable.

The rogue's role in a group can vary dramatically based on their skill selection - from charismatic con artist to cunning burglar to agile combatant - but most rogues share certain aspects. They aren't capable of prolonged melee combat, so they focus on opportunistic sneak attacks or ranged attacks. The rogue's stealth and their trapfinding ability make them one of the best scouts in the game.


Rogue Bonus Feats:
Each feat can only be taken once: