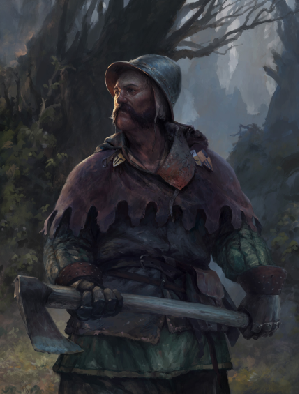 Whether alone or in a group, scouts brave the darkest frontiers. Armies often employ scouts for surveillance on enemy regions, while adventuring parties use their expertise to dismantle the tricks and snares of the many kinds of monstrous deep-dwellers that lurk in benighted caverns and old abandoned strongholds. Some scouts even sell their services as bounty hunters, and the greatest of them are capable of charging a pretty penny for the kind of intel that only they can acquire with their particular set of skills.

Scouts are adaptable combatants, equally dangerous at range as they are up close, but their tactics rarely involve tackling foes head-on. Their knowledge of traps and their desire for better mobility leads them to guerilla tactics; hit-and-run, misdirection and taking advantage of their environment and allies. Not only this, but their specialist training allows them to identify the most dangerous of foes, allowing them to signal others to eliminate a mark before their allies even have time to blink.

No scout is inherently good or evil, nor are they necessarily underhanded or sly. A scout can be a quiet observer and reporter of events, or a surveyer of new territory to identify potential threats for those who employ them, or even those they care about. Scouts can be so morally upright as to be pacifist while still efficiently performing their role.
However, they can just as easily be vile and reprehensible, leading people to their deaths with false reports, or being the ones who lay snares for others. They can be trackers and hunters, seeking particular people or groups out with nefarious intent.

Scouts can be military, civilian or wild nomad. Most civilizations have scouts in some form or another - in fact, the most barbaric tribes often know best the value of learning the land that lies before them. Similarly, elves, dwarves and orcs all hold particularly high regard for scouts for varying reasons, but no culture or race is without their own subtly differing iteration of them.