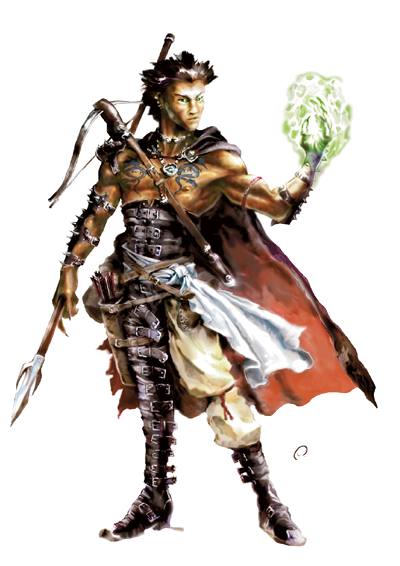 Sorcerers create magic the way a poet creates poems, with inborn talent honed by practice. They have no books, no mentors, no theories - just raw power that they direct at will. Some sorcerers claim that the blood of dragons or other creatures courses through their veins, though few take such claims at face value. It's true that sorcerers often have striking good looks, usually with a touch of the exotic that hints at an unusual heritage. Others hold that the claim is either an unsubstantiated boast on the part of certain sorcerers or envious gossip on the part of those who lack the sorcerer's gift.

The typical sorcerer adventures in order to improve their abilities. Only by testing their limits can they expand them. A sorcerer's power is inborn - part of their soul. Developing this power is a quest in itself for many sorcerers, regardless of how they wish to use their power. Some good sorcerers are driven by the need to prove themselves. Marked as different by their power, they seek to win a place in society and to prove themselves - and magic itself - to others. Evil sorcerers, however, also feel themselves set apart from others - apart and above. They adventure to gain power over those they look down upon.

Sorcerers cast spells through innate power rather than through careful training and study. Their magic is intuitive rather than logical. Sorcerers know fewer spells than wizards do and acquire powerful spells more slowly than wizards, but they can cast spells more often and have no need to select and prepare their spells ahead of time. Sorcerers do not specialize in certain schools of magic the way wizards sometimes do. Since sorcerers gain their powers without undergoing the years of rigorous study that wizards go through, they don't have the background of arcane knowledge than most wizards have. However, they do have more time to learn fighting skills, and they are proficient with simple weapons.

For a sorcerer, magic is an intuitive art, not a science. Sorcery favours the free, chaotic, creative spirit over the disciplined mind, so sorcerers tend slightly toward chaos over law.

Sorcerers develop rudimentary powers at puberty. Their first spells are incomplete, spontaneous, uncontrolled, and sometimes dangerous. A household with a budding sorcerer in it may be troubled by strange sounds or lights, which can create the impression that the place is haunted. Eventually, the young sorcerer understands the power that they have been wielding unintentionally, or they die before they can attain such understanding. From that point on, they can begin practicing and improving their powers. Sometimes a sorcerer is fortunate enough to come under the care of an older, more experienced sorcerer, someone who can help them understand and use their new powers. More often, however, sorcerers are on their own, feared by erstwhile friends and misunderstood by family. Sorcerers have no sense of identity as a group. Unlike wizards, they gain little by sharing their knowledge and have no strong incentive to work together.

Like wizards, sorcerers can magically bond with a critter or animal, commonly known as familiars.

Most sorcerers are humans or half-elves, but the innate talent for sorcery is unpredictable, and it can show up in any of the common races. Arcane spellcasters from savage lands or from among the brutal humanoids are more likely to be sorcerers than wizards. Kobolds are especially likely to take up this path, and they are fierce, if inarticulate, proponents of the "blood of the dragons" theory.

Sorcerers find that they have the most in common with members of other largely self-taught classes, such as druids and rogues. They sometimes find themselves at odds with members of the more disciplined classes, such as paladins and monks. Since they cast the same spells as wizards but do so in a different way, they sometimes find themselves in competition with wizards.

A sorcerer tends to define their role based on their spell selection, which in turn is molded by their innate bloodline. A draconic sorcerer who focuses on damage-dealing spells becomes a center of the party's offensive power. Another of fey blood may rely on more subtle magics, such as charms and illusions, and thus take a quieter role. A party with a sorcerer should strongly consider including a second spellcaster, such as a bard, cleric, druid, or even a wizard, to make up for the sorcerer's lack of versatility. Since a sorcerer often has a powerful presence that gives them a way with people, they may serve as the "face" for an adventuring party, negotiating, bargaining, and speaking for others. The sorcerer's spells often help them sway others or gain information, so they make an excellent spy or diplomat for an adventuring party.

Spellcasting: Arcane (spell failure from armor is a factor), charisma-based (a base charisma score of 10 + the spell's level is required to cast a spell, bonus spells are based on modified charisma, and the charisma modifier affects spell DCs), and spontaneous cast (no spell preparation required).