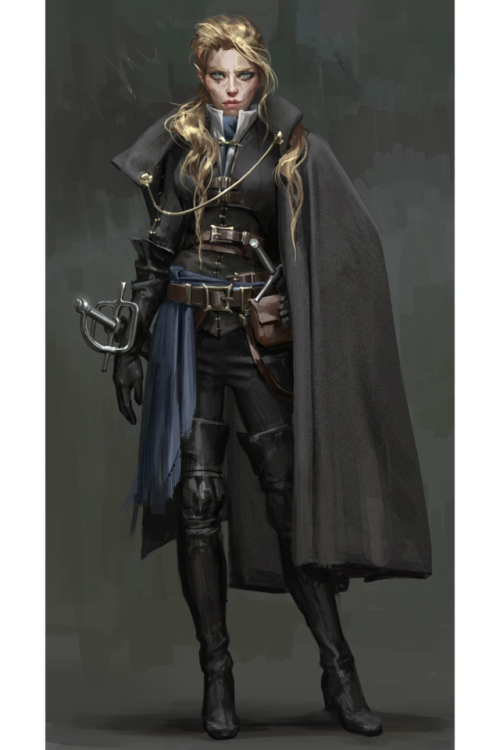 The swashbuckler embodies the concepts of daring and panache. Favoring agility and wit over brute force, the swashbuckler excels both in combat situations and social interactions, making her a versatile character indeed.

Swashbucklers adventure for a variety of motivations, based on their alignment and background. Some seek to right injustices, while others seek only fame and fortune. All swashbucklers, however, share a tendency to leap into action when the call comes, regardless of their personal views.

The swashbuckler combines skill and finesse with sheer combat prowess. Though swashbucklers can't dish out quite as much damage as a typical fighter or barbarian, they tend to be more agile and mobile than most melee combatants. When she can pick her battles carefully, a swashbuckler becomes a very deadly opponent (not to mention hard to pin down). Swashbucklers also hold their own in social situations, unlike most fighters.

Like rogues, swashbucklers tend to be diverse in their outlooks, and thus in their alignments. Those who chafe under societal restrictions tend to be chaotic, while those who uphold honourable traditions may well be lawful.

Many swashbucklers come from affluent backgrounds, but anyone valuing finesse over force can become a swashbuckler, regardless of background. A common shared element among swashbucklers' backgrounds is life in an urban environment, whether the back alleys of a slum or the cultured halls of royalty. Swashbucklers tend to see other swashbucklers as rivals rather than allies, even when sharing similar goals. The swashbuckler's need for attention often outweighs her better judgment, leading either to friendly competition or even outright distrust and antipathy.

Swashbucklers prefer to work with other quick, lightly armoured characters. They get along best with rogues and bards, and appreciate the agility and combat talents of the monk (though chaotic swashbucklers may chafe at the monk's ascetic nature). Lawful good swashbucklers often share the paladin's honourable nature, but otherwise the classes tend to clash in their approach to life. Swashbucklers have no particular distaste for spellcasters (apart from potential prejudice, fear or wariness stemming from The Longest Year), and they appreciate the utility of a cleverly chosen, well-timed spell. They don't interact with barbarians, druids, or rangers very often, since these characters tend to prefer natural settings to the typical urban environment of the swashbuckler.

The swashbuckler is an able melee combatant, particularly when paired with a fighter or rogue. They can also make a fine party leader or spokesperson, thanks to their access to Charisma-based skills.

Proficiencies: Swashbucklers are proficient with all simple and martial weapons, and with light armor. Some of the swashbuckler's class features, as noted below, rely on her being no more than lightly armored.