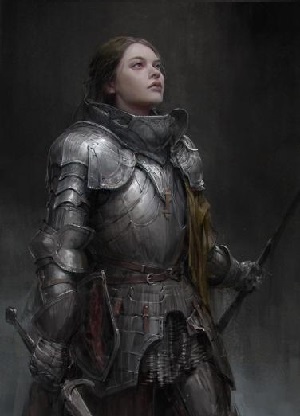 While the most classic example of a warden is something akin to a paladin that has not so wholly devoted themselves to a god or divine cause, there are many ways in which wardens can differ. A warden can be a cunning strategist who knows the power of confident words that boost the morale of their soldiers, or they can be a ruthless tyrant who uses their intimidating presence to bully minions into fighting harder out of the fear of displeasing them.

A warden’s words are in many ways the most powerful tool in their possession, as long as they have allies at their side. By no means, though, does this mean that a warden is defenseless without their companions. To the contrary, their experience in war is exactly what affords them their air of calm in the face of great danger.

Not all wardens are leaders. Some are bannermen, tirelessly holding aloft the symbol of their god or the flag of their nation to inspire and invigorate, bellowing great war cries of defiance in the face of seemingly insurmountable odds.

Others are simply the most positive of souls, whose unerring optimism alone is a beacon of courage and comfort to those around them. Yet still there are those who are so terrifyingly efficient or brutal to behold in battle that their allies are merely grateful to be on their side and not their enemies.

Most wardens wear heavy armour, but not all, just as not all wardens are found with a shield in hand, instead favoring pure offense.
But no matter what, the warden’s immutable spirit gives them the force of will to take blow after blow, often for the sake of those who fight for or with them. So, too, does that mental fortitude allow them to shake off the kind of influences that would cripple weaker-willed warriors.

Proficiencies: A warden is proficient with all simple and martial weapons and with all armor (heavy, medium, and light) and shields (including tower shields).