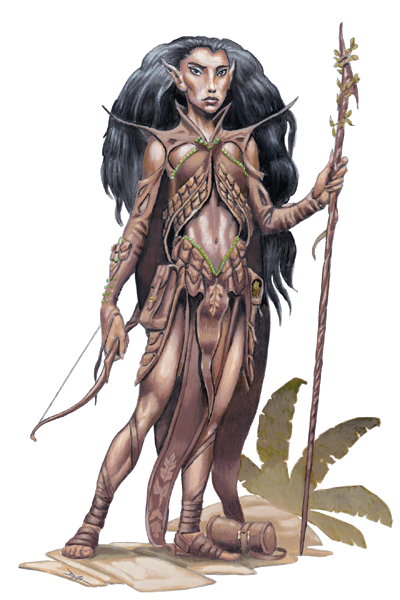 With magic's return, a few unintelligible words and fleeting gestures can once again carry more power than a battleaxe, when they are the words and gestures of a wizard. These simple acts make magic seem easy, but they only hint at the time the wizard must spend poring over their spellbook preparing each spell for casting, and the years before that spent in apprenticeship to learn the arts of magic. Wizards depend on intensive study to create their magic. They examine musty old tomes, debate magical theory with their peers, and practice minor magics whenever they can. For a wizard, magic is not a talent but a difficult, rewarding art.

Wizards conduct their adventures with caution and forethought. When prepared, they can use their spells to devastating effect. When caught by surprise, they are vulnerable. They seek knowledge, power, and the resources to conduct their studies. They may also have any of the noble or ignoble motivations that other adventurers have.

The wizard's strength is their spells. Everything else is secondary. They learn new spells as they experiment and grow in experience, and they can also learn them from other wizards. In addition to learning new spells, a wizard can, over time, learn to manipulate their spells so they go farther, work better, or are improved in some other way. Some wizards prefer to specialize in a certain type of magic. Specialization makes a wizard more powerful in her chosen field, but it denies her access to some of the spells that lie outside that field (see School Specialization below). Like a sorcerer, a wizard can call a familiar - a small, magical animal companion that serves them. For some wizards, their familiars are their only true friends.

Overall, wizards show a slight tendency toward law over chaos because the study of magic rewards those who are disciplined. Illusionists and transmuters, however, are masters of deception and change, respectively. They favour chaos over law.

Wizards often recognize each other as comrades or rivals. Even wizards from very different cultures or magical traditions have much in common because they all conform to the same laws of magic. Unlike fighters or rogues, wizards tend to see themselves as members of a distinct, if diverse, group. In civilized lands where wizards study in highly regulated academies, schools, or guilds, wizards also identify themselves and others according to membership in these formal organizations. But while a guild magician may look down her nose at a rustic wizard who learned his arts from a doddering hermit, they nevertheless can't deny the rustic's identity as a wizard.

Humans take to magic for any of various reasons: curiosity, ambition, lust for power, or just personal inclination. Human wizards tend to be practical innovators, creating new spells or using old spells creatively. Elves are enthralled by magic, and many of them become wizards for love of the Art. Elf wizards see themselves as artists, and they hold magic in high regard as a wondrous mystery, as opposed to the more pragmatic human wizards, who see magic more as a set of tools or tricks. Illusion magic comes so simply to gnomes that becoming an illusionist is just natural to brighter and more talented ones. Gnome wizards who don't specialize in the school of illusion are rare, but they don't suffer under any special stigma. Half-elf wizards feel both the elf's attraction to magic and the human's drive to conquer and understand. Dwarf and halfling wizards are rare because their societies don't encourage the study of magic. Half-orc wizards are rare because few half-orcs have the brains and/or circumstances necessary for wizardry. Drow (evil, subterranean elves) often take up wizardry, but wizards are quite rare among the savage humanoids.

Wizards prefer to work with members of other classes. They love to cast their spells from behind strong fighters, to "magic up" rogues and send them out to scout, and to rely on the divine healing of clerics. They may find members of certain classes (such as sorcerers, rogues, and bards) to be not quite serious enough, but they're often not judgmental.

The wizard's role depends somewhat on their spell selection, but most wizards share certain similarities in function. They are among the most offensively minded of the spellcasting classes, with a broad range of options available for neutralizing enemies. Some wizards provide great support to their comrades by way of their spells, while others may focus on divination or other facets of wizardry.